Every Tuesday morning, a group of students hailing from countries as far away as Panama, Russia, France, Korea, Pakistan and Palestine enter the doors of Broadview Heights Baptist Church. In the church’s classrooms, volunteers can be found quizzing the students on vocabulary words and encouraging them to converse in English.

Students complete a lesson in their workbooks. Photo by J. Mitchell

The church, located at 9850 Broadview Rd., has been offering free English as a Second Language classes to the community since March 2019. The only cost to students is a $10 book fee.

Classes are divided into three levels, depending on skill (students are assessed when they enter the program), and run Tuesdays from 9:30-11:30 a.m., September through May. 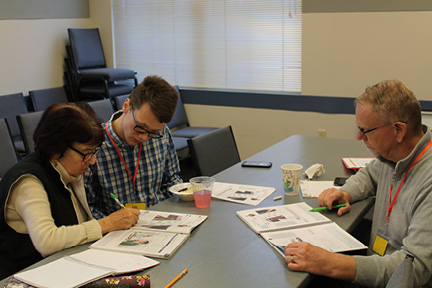 Volunteers instruct a student from Russia (on left). Photo by J. Mitchell

The program came to fruition when a missionary in Ireland visited Broadview Heights on furlough and spoke at a BHBC service about their work, including an ESL ministry they had started at their church, said ESL program director Cara Nolan.

“I went to the service, and I really felt that the Lord was speaking to me, saying, ‘You really need to be involved in a ministry like this,’” Nolan said.

After the service, she found her pastor, the Rev. Joel Royalty, and told him, “I’ve never felt anything like this.”

Royalty told her he had just been thinking that he didn’t have time to run the ministry himself, and he had asked God to send someone to help him.

Nolan took a weekend course about running an ESL ministry and obtained a curriculum for the classes. In March 2019, about five students showed up. By September, that number had grown to 21. 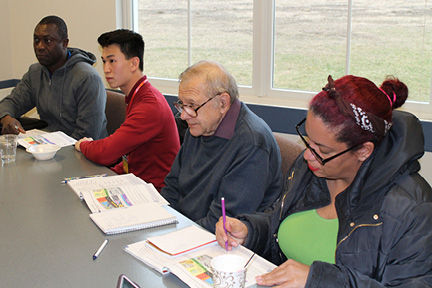 Students listen to their instructor as they complete a lesson in their workbooks. Photo by J. Mitchell

“They’re not all there the same day,” Nolan said. “Adults have other obligations. But there’s a pretty good core group that comes regularly.”

Along with free courses, the church also offers free childcare for children up to age 5 (older children would be in school, Nolan said).

A staff of 11 volunteers teaches the classes. Each of the three classrooms has a teacher and at least one assistant.

“One of our teachers is a retired certified teacher herself,” Nolan said. Royalty teaches another class, and several homeschooled teens volunteer, as well. 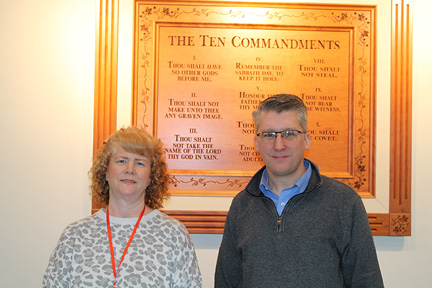 Students come from Broadview Heights, as well as the west side of Cleveland and Bedford, Nolan said. The youngest is 24, while the oldest, a married couple, are about 70.

“Many of them have lived here for, I would say, six to 10 years on average,” Nolan said. “But often, they form a community with their family or workers where they are speaking their native language. And especially with those that speak Spanish, they go to markets where that language is spoken. So they don’t have to practice or work on their language that much.”

She said one of the students, from Honduras, had been working in the United States and then heading back to his home country every few months for the past 22 years.

“His English was not very good,” she said. “But he is just a diligent student.”

Students take the classes for varying reasons. Some have specific goals in mind.

“A couple of our students have expressed interest in taking a citizenship test, so we hope to help them work towards that goal,” Nolan said. “One of our students wants to go into the medical field as a nurse or nurse’s aide, and she has to improve her English before she can take the classes, so that’s one of her goals.”

A typical class covers one chapter in the curriculum, including exercises and homework.

“The idea is to have the students do more talking than the teacher. They are asking each other questions in English. The premise of this program is that speaking is the most important thing they will learn.”

Students take a break for refreshments halfway through the class.

“It’s important to have a safe space where they can practice their English where no one’s going to laugh at them,” Nolan said.

She said the biggest challenge in offering the program has been keeping the students coming.

“Life gets in the way, and we have a higher percentage of women than men,” she said. “They have children to care for, maybe transportation issues. A couple of men started coming and then their jobs changed. … Adult life gets in the way of their desire to learn English.”

Nonetheless, Nolan said, it’s rewarding to watch the students put in the work, learn and grow. She remarked on their friendliness and said that in turn, she’s learned from them about their cultures and personal challenges.

“I think that’s what keeps many of them coming back,” she said. “They make connections with other students and their teachers. It’s a time when they can share if they’re experiencing difficulties in their lives, and with people who can certainly understand it.”

The program’s mission is guided by the Bible verse Matthew 25:40, Nolan said, which reads, “Truly, I tell you, whatever you did for one of the least of these brothers and sisters of mine, you did for me.”

“As a church, we can say, ‘Oh, I’m going to pray for you.’ … But to reach out and fill a need for someone is what Jesus really wanted us to do,” Nolan said.

The program embraces students of all religions. New students can start any time during the year. Sign up is available at broadviewheightsbc.com/esl or by calling the church office at 440-546-1870.

Or, said Nolan, “They can just show up on Tuesday mornings. We’re happy to have them come and do an assessment and get them started. A person can jump in at any point. … We’d love to have more students.”

Featured image photo caption: Volunteers at Broadview Heights Baptist Church meet with students hailing from across the globe on a Tuesday morning to help them with their English skills. The church has been offering a free English as a Second Language program to the community for the past year. Photo by J. Mitchell

See All
A Tribute to Mothers

Certain days are set aside to honor special events. We celebrate Christmas and Easter. Birthdays and anniversaries are recognized as personal celebrations. Mother’s Day, however, is a tribute to a uni

After coming through a month of teaching Stewardship Principles, It is good to review some foundational truths. Having a schedule is a necessary part of life. Where would we be without calendars, dat